Taking Taxpayers for a Ride

According to the article:

-       Cuomo uses state aircraft more than any other big-state governor.

-       The governor refuses to take the train or subway, even when his schedule permits.

-       Cuomo uses state aircraft to attend events that are political in nature, such as using the helicopter to return to Albany after a fundraiser.

-       The governor once took the helicopter for a trip that was only 13 miles.

“At a time when our subways and highways are falling apart, Cuomo is above solving the problem – literally,” said Stephanie Miner. “Now we know there’s one set of rules for him, and another for the rest of us.”

Miner pledges to tighten rules on use of state aircraft. She also called on JCOPE to review the governor’s travel expenses. 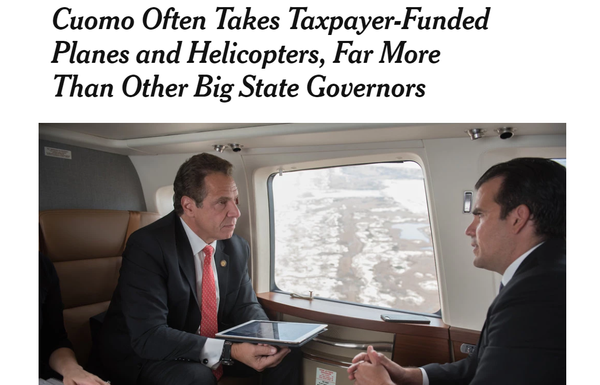